Chronic migraine in a 53-year-old male

This case report is a part of a pilot series of observations reported in 2013 by home users of 980nm Delta Lasers for headaches.

A 53-year-old male had migraine for as long as he can remember. In recent years, moderate to very severe headaches were present during five days per week. Most severe migraine attacks lasted for three days in a row, with pain level 10 (0 - no pain, 10 - worst imaginable pain). During the past four years he had to stop using all medication, owing to serious liver damage from negative side-effects of drugs. Because of the migraine he remained unemployed with only a part-time job.

During the first week of daily treatments and the following nine rest days the male did not notice significant changes in his level of pain. However, three days after he resumed daily treatments his condition improved drastically and he had 11 days in a row almost without pain. Later some pain returned, but by the ninth week the condition of the male stabilised with practically all days being without pain or with mild pain only.

During a follow-up interview seven weeks after stopping coMra-Therapy, the male noted that he had only two attacks with moderate pain (level 4-5). He shared:

"In general, I am in a better mood, happier and my quality of life has improved a lot. My relationships with relatives have improved. It is more pleasant to engage in conversations and to listen, because I am not annoyed by headaches. I feel no longer limited in thinking and taking decisions. I feel more free."

At a six and half-month follow-up the male noted that now he has one or two headache events per month. The pain is mostly mild, up to a maximum of level 4 and of short duration.

A new approach to healing headaches: 2 Cause of primary headache 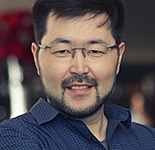 Arzhan's fascination with Nature and his firm belief in Science led him to a career as a research scientist. But after spending years in government-funded research (Russia and the U.S.A), he could clearly see that the research community, generally speaking, does not meet its responsibilities towards human, plant and animal Life. In his search for an alternative way, Arzhan discovered Radiant Life Technologies, a group of like-minded individuals who had joined their skills and resources to develop technologies that are fully life-supportive.

The author would like to thank the male for sharing his observations. He provided informed consent for conducting and publishing the case study.

© Copyright 2014, Surazakov. This article is distributed under the Creative Commons license, which permits unrestricted use and redistribution provided that the original author and source are credited.